As published in this past Sunday’s Observer, Zoe Wood reports that “the market for products derived from the obesity ‘epidemic’ could be worth £1 trillion within four years”. That is $2 trillion in US dollars.

According to the World Health Organization, almost 1/3 of the world’s population is overweight, while 400 million are clinically obese. The numbers for “first world” nations are even worse.

2005 WHO obesity estimates pegged the United States as the world’s fattest nation. (see chart below) 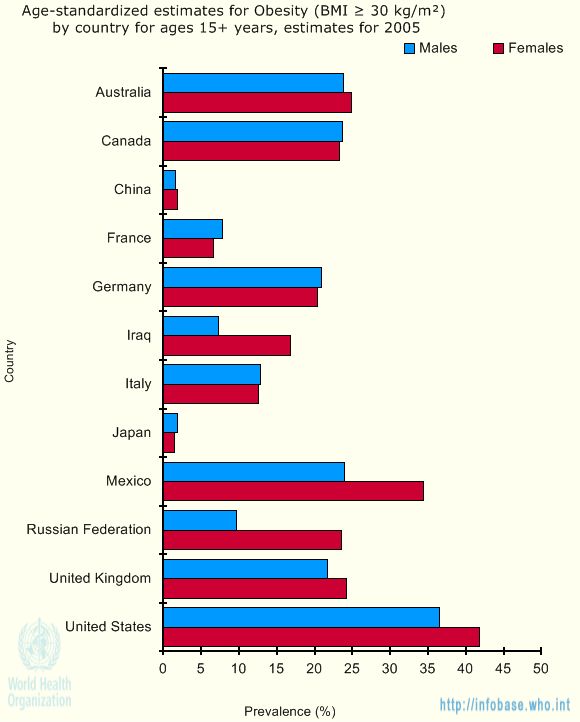 However, in a perverse show of nationalistic pride, a recent report by the Baker Heart Research Institute, claims that Australia has overtaken America as the world’s fattest nation.

To further cloud the issue, the WHO estimates for obesity rates in the year 2020 still show America as #1. And Australia lagging far behind.

Obviously someone has got their numbers wrong. Here are the WHO estimates. 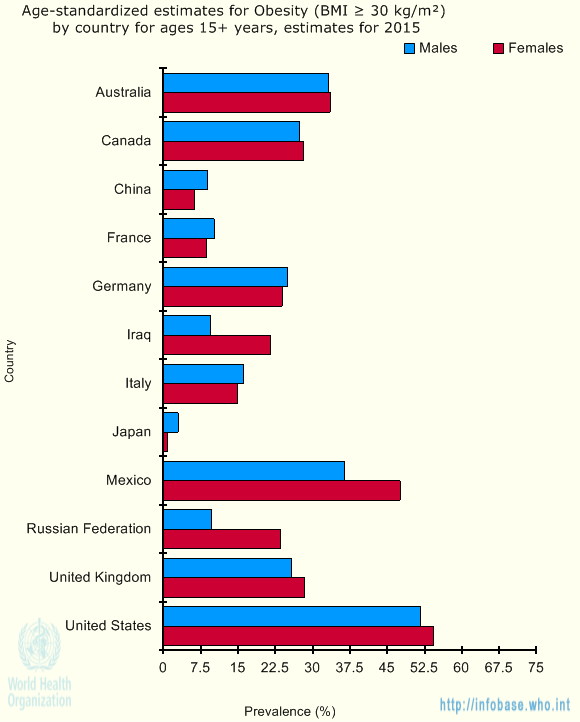 Let’s move away from obesity for a minute. What about those individuals that are merely “overweight“.

According to the WHO, the world’s most overweight nations, regardless of economic, political or military dominance are:

What the heck is going on in the South Pacific? Those are some crazy obesity stats.

What about the money?

In a report issued by Credit Suisse, analysts said “The global obesity “epidemic” will have a material impact on global business strategy over the next decade. A greater awareness about its costs is not only changing society but infiltrating the business world in health care and other major industries”.

In English, “the larger a problem gets, the more attention and resources it gets”

Credit Suisse claims that the “companies best placed to benefit from the development are those devising products that either help people to lead healthier lives or that treat the symptoms of obesity”.

So who are these companies best placed to capitalize on our expanding waistlines?

As reported in the Wall Street Journal, Credit Suisse has assembled an index of 15 stocks that they feel will “experience outsized revenue and earnings growth over the next 5 years compared to their peers.”

If you want a wild card, go for Kuala Lumpur Kepong, a Malaysian palm-oil company that may see an uptick in business as food makers look for alternatives to trans fats

So what does this mean to me?

If you are looking for a growth market to invest your life savings in, the obesity industry might a good idea. Think about it. People are getting fatter and fatter with no end in sight.

For years, authors have promised miracle diets while drug and supplement companies have given us miracle pills. And yet, we get fatter and fatter.

So, we have a marketplace that is eager to believe in miracle solutions and apparently never becomes disillusioned when they don’t work. The dieters, pill poppers and frantic exercisers just blame themselves, their poor genetics, their lack of self-discipline….and hop right back into their SUV, drive down to the mall and pick up the latest best selling diet book and wash it down with a triple Venti half-caf mocha caramel frappuchino with extra whipped cream and a dollop of irony.