Last month, I predicted that America will soon be paying 5 bucks for a can of Coke.

And it looks like that prediction may be coming true.

In an interview with Men’s Health magazine, President Obama was asked “would he consider so-called sin taxes, on soda and other sugar-laden products, or on activities that sabotage the health of the masses?

“I actually think it’s an idea that we should be exploring,” the president says. “There’s no doubt that our kids drink way too much soda. And every study that’s been done about obesity shows that there is as high a correlation between increased soda consumption and obesity as just about anything else. Obviously it’s not the only factor, but it is a major factor.”

But even the most powerful man on the planet needs to keep an eye on what’s politically feasible:

“Obviously there is resistance on Capitol Hill to those kinds of sin taxes,” he says. “Legislators from certain states that produce sugar or corn syrup are sensitive to anything that might reduce demand for those products. And look, people’s attitude is that they don’t necessarily want Big Brother telling them what to eat or drink, and I understand that.

It is true, though, that if you wanted to make a big impact on people’s health in this country, reducing things like soda consumption would be helpful.” 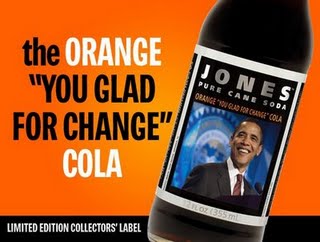 Somehow, I don’t think that this is the type of change that the people at Jones Cola had in mind when they came up with their Orange “You Glad For Change” Cola to commemorate the inauguration of President Obama.