How to (not) Make Your Child a Junk Food Addict

Obviously no one wants to make their child a junk food addict.

Unfortunately…a new study out of Australia (conducted on rats) “suggests that pregnant mothers who consume junk food actually cause changes in the development of the opioid signaling pathway in the brains of their unborn children. This change results in the babies being less sensitive to opioids, which are released upon consumption of foods that are high in fat and sugar.

In turn, these children, born with a higher “tolerance” to junk food need to eat more of it to achieve a “feel good” response.

Researcher fed one group of soon-to-be-a-mommy rats a normal rat food diet and a second group a range of human “junk foods” during pregnancy and lactation.

After the rat pups were weaned, the pups were given daily injections of an opioid receptor blocker….which blocks opioid signaling. This in turn lowers the intake of fat and sugar by preventing the release of dopamine.

Test results showed that the opioid receptor blocker was less effective at reducing fat and sugar intake in the pups of the junk food fed mothers, suggesting that “perinatal exposure to high-fat, high-sugar diets results in altered development of the central reward system, resulting in increased fat intake and altered response of the reward system to excessive junk-food intake in postnatal life“.

Or in layman’s terms…Garbage In : Garbage Out. 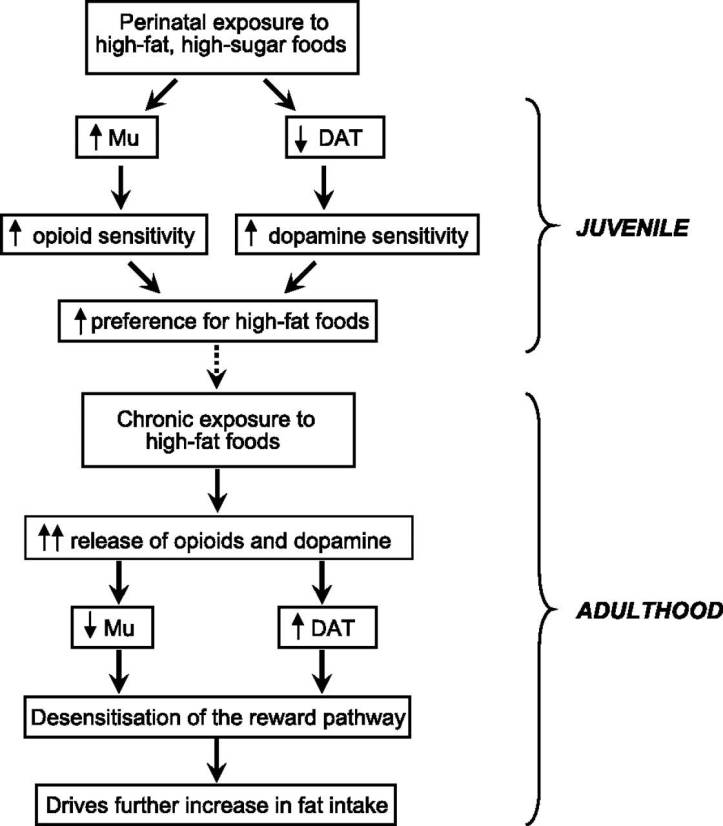